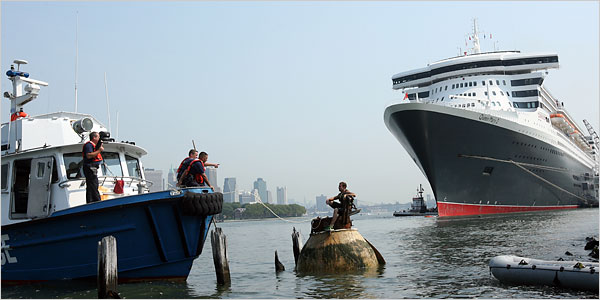 Amusing incompetence in the harbor at Red Hook:

"The man, Duke Riley, a heavily tattooed Brooklyn artist whose waterborne performance projects around New York have frequently landed him in trouble with the authorities, spent the last five months building the vessel as a rough replica of what is believed to have been America’s first submarine, an oak sphere called the Turtle, said to have seen action in New York Harbor during the Revolutionary War.
...
Mr. Riley, who emerged from his rusty hatch without the tall-boy can of beer he had taken into his vessel when it launched about 9:15, managed to make it to within about 200 feet of the bow of the ship, at a time when officials say harbor security is a critical factor in guarding against terrorism. From a nearby pier, several of his friends and his art dealers shouted congratulations through a chain-link fence.
...
On Thursday evening, he and the two friends, Jesse Bushnell and Mike Cushing, scrambled around in the murky Red Hook water — avoiding the occasional condom or dead rat — to make sure that the sub, called the Acorn, was seaworthy and would submerge. (It never did so completely.) They had loaded several thousand pounds of lead into the bottom and were adding rocks to further lower the moss-coated vessel, which resembled something out of Jules Verne by way of Huck Finn, manned by cast members from “Jackass.”

“We start arguing with each other and saying, ‘Hey, you’re doing that wrong,’ ” said Mr. Bushnell, who owns a bicycle shop in Providence, R.I. “And then we realize there is no right way to do this.” He added grumpily, “I’ve basically been wading around in this water for three days in my underwear.”
...
“I’m not really a very technical kind of guy,” he said, sitting shirtless on the pier Thursday with various green things still clinging to his arms from the water. “I just guessed a lot on this.” Asked how he planned to get back to shore after the tide carried him out to the cruise ship, he grinned. “I haven’t really thought about that yet,” he said."

Full Story at: An Artist and His Sub Surrender in Brooklyn - New York Times
Posted by Dave Y at 3:42 PM

Weirdos! Red Hook's not far from me - if anyone needs to visit the site or meet more weirdos you have a place to stay (though we smell like smoke.)

When the news first reported this, I assumed he was some sort of a reenactment enthusiast. You know, someone with a lot of time and money on their hands, and tons of research and insight and testing behind it.
No. This man is an artist with no technical experience. By his own words he just "guessed a lot". Can you imagine? That would be like if I decided, "well, I like flying, I bet I could build a hot air balloon, in fact, I think I might build the Hindenburg just to see if it works". This guy is not only lucky that they aren't bringing him up on terrorist charges, he's lucky he didn't sink to the bottom of the harbor.

"...several thousand pounds of lead..."? What kind of idiot..? Man, I'm recommending this to the host of The Friday Five at Five on WRMC. Maybe he'll play some good submarine music.