Aaannd, Happy Birthday to Me
Posted by Dave Y at 6:34 PM 1 comment:

For all you new-englanders

Ended up reading a clambake recipe (if you can call it that) today from Slaid Cleaves, a musician I know a song or two by. It made me want to live in Maine, if only for a summer or two.

Play it Out: Design Chat 1

So, I recently got it into my thick skull that I should try to take some of the ideas floating around in my mind and write a game. People were very supportive of the idea, because I hang out with people who are supportive like that. So after much hand-wringing, I think the first (HA! listen to me! like I'm gonna write all these and more!) game I try my hand at will be Play it Out. So, I volunteered my friend Jeff to help me. Since he is a professional actor who does a LOT of improv experience, I'm clearly the weak link in this conversation. But, here it is. Raw. Unspellchecked. I'm excited about the idea. this is mostly here for my reference, but maybe you're having a slow day and want to drop a comment or suggestion.

me:So, your first task in helping me (attempt to) design the improv-play game is to list fortune mechanisms that can happen in scene for the players to know how the scene is supposed to go.
-coin toss
-dice roll
-playing card shown
- one player hides an object, another tries to guess the hand
- the audience provides an object that indicates the direction
- darts
- guessing the fingers on a hand ( or not)

Jeff: Huh. Thus making it more a game and less an improvised scene?
Or, less a free-form improvisation?

me: yes, the latter
you map the scenes ahead of time : scene 1: what's at stake is... who wins in the initial conflict, the capulets or the montagues...

Jeff: Hrm. My first thought is that it's best to make the mechanic suit the world of the game, such as the playing cards in Deadlands. My second thought is that something ...right, right, I remember the tree...

me: scene 5: does she climb out the window to meet him?
so the determination happens on stage, near the beginning (or as late as the climax) of a scene

Jeff: Clarify this: Do theye discuss the possible scene-results (1 or 2) at each juncture, or is it all coursed out befopre play? If the latter...could perhaps the final scene be undecided, no options, just what plays in the moment?

Jeff: And back to the machanic, it also would appeal to ahve either something inherently on-hand and human (like the fingers guessing) or something VERY interruptive and theatrical, like stopping everything to ask an audience member whetehr they prefered rock or rap.

me: but thats probably way lesss satisfying than what you're saying

me: true. or a pear, really
Jeff: In that scheme, it goes from one choice to many, but back to one or two? Is that because the possibilities narrow back down, or because the story is ultimately about this one thing? It seems a bit inevitable, which I would think would be a bit dull compared to 37 possible resolutions. Or infinite as an imagination.
But I may not be grasping the right part of the elephant here.

me: youre right. at least 2 possible endings.
because, particularly if it isn't necessarily comedy and you're approaching a characters issue or a "which is more important, duty or honor" type sitch, you want to resolve binarily on that in the end, no?

Jeff: You know what this reminds me of? Somewhat tangential, sorry. I recently found out that DC comics completely revised their character histories, almost across the boards, back in the late sixties. In retrospect, to justify this in terms of mythology, they said that at some point Superman got tranferred to an alterante Earth, Earth 2, and that that was what the early sixties were about. Then we got back to Earth 1. Now they're spinning wild plots off of this, essentially metaphysical, superglu plot device, in stories like Infinite Crisis. I love it. Fiction utterly unbounded.
But your points: I agree. Binary is what works best for high stakes, at least in terms of individual characters. But how much of this game works that way? Does each character have their own tree, or do they serve a kind of plot tree?
When I suggested no predetrmined "branches" for the top of the tree (or "roots" for the bottom, whatever metaphor) I was thinking of it as a plot tree. And you never answered when they determine the options: in the scene before, or before the whole game?
Type faster. ;)

me: initially i envisioned one or two reall protagonists, whose tree it is. players beyond the two will be taking on multiple supporting roles to make that premise tree work. I think in order for the perfomance to flow, you have to determine all ahead of time

me: and use a big easel with the page you r'e on to keep track during perofrmance
see what happens when i type fast?

Jeff: Ah, very McNally.
I can take it.

me: that means nothing to me, but i take it as support

Jeff: As it was meant.
Continue?

me: right. so there's a funly-set-up brainstorming session where all the possible scenes are mapped out with awesome "I can't decide if its cooler to win or lose" stakes are set down, and then you make a page on your big pad for each decision point (scene)

me: and the director (or players if you don't have enough to have a set director/prop hand keeps track of what is happening and changes the page to where it should be for the next scene

Jeff: This is great tehatre, even without the actors.

me: ... not seeing how this relates to mcnally , so it must be something he does not mentioned there
and so maybe for each scene in the beginning you do:
-stakes
-scene pointers (outcomes that point to new scenes)
- fortune mechanism (how will we know when the time comes)
i'd like it to vary somewhat from scene to scene so its not a distraction to the audience all the time (some of the time is fine)

Jeff: See, I think part of the fun of this is the exposure of the machanics. The audience will get so wrapped up in a scene, and then chance eneters, and it's REALLY CHANCE. Not prefabricated outcome, or well-rehearsed vaudeville schtick. In that case, each time it happens, it will mean more and more to them, and you'll have them
1. On the edge of their seats about how the die rolls
2. THEN even more absorbed in how the scene they know is coming will play out.
For example:
me: you think so?
do you show them the easel?

Jeff: Si!
Jonah and Ryan have a scene about who's going to go into the next room to kill Dorah, the lunatic who knows too much. They both want to, and can;t understand why they have to fight each otehr to do it. During the scene it is revealed they both have reasons for wanting to be the one: Jonah knows Dorah wants to expose him as her rapist, and Ryan loves Dorah, and can;t trust Jonah to do it with kindness. At the height of their positioning and arguing, it comes down to who gets the gun when it falls out of one of their bags.

Flip the coin. Choose an audience member to pick a closed fist. Whatever.

The next scene happens, and builds to a similar moment, except this time maybe it's whetehr opr not Dorah is killed.

YES! SHOW THE EASAL!
Ilove this, but maybe I'm turning it more tehatre than game. Not sure of your intentions and hopes.

me: no, you're precisely on target and delivering the goods
because taht method wouldnt hve come to me naturally and it totally rocks nine ways to Babylon

me: because at that point in the game its supposed to be completley the ater
yes YES !YESS!!
GM/Moderator/Narrator as ncecessary/ prop hand/ page turner
who hands one of these http://paizo.com/store/toys/plushes/dice to an audience member in some scenes.

Jeff: Curious to think about what the actors should do at these moments. I'm inclined to think they should be involved, not just shut down or silent, maybe even championing their character. In character? Not sure.
NICE. I like the "dangler." Doubles as a bolo.

me: but then, the variation of fortune mechanisms is lost. Your way is definitely cooler, but I still have this vision of one character being like "is THIS your card?" and then they both realize OH CRAP now we have to make the scene do THIS. but its a vaudeville routine, you're right. but maybe, counterpoint,that's easier for those of us without advanced improv training
I like the "frozen while diving for the gun but watching the audience"
like "Hey, you're in this too, buddy"

Jeff: The beauty of the oversized dice is the embrace of one of the traditions we're borrowing from. It's a good gimmick to keep in mind for when we tour with this form of improv. ;)

me: we meaning you and yours i hope. i'll roll the die from the audience

Jeff: Yeah, maybe it should be determined by scene, or the GM (whistle for freeze, call for active characters, clap for actors arguing FOR their characters).
NO ONE IS SAFE FROM THE STAGE!

me: hrm. TBD later i think. that seems like a minor decision

me: So now i just need crackling fun mechanics for the brainstorm session, and to be able to teach improv when i'm terrible at it myself.
but this seems like a natural stopping point for picking your brain for now. much to think about
Posted by Dave Y at 5:41 AM 18 comments: 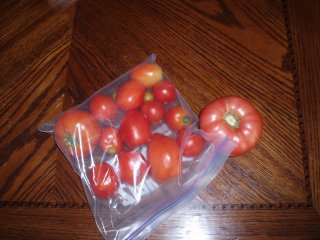 Just a few of the tomatoes I brought in to work a while back. 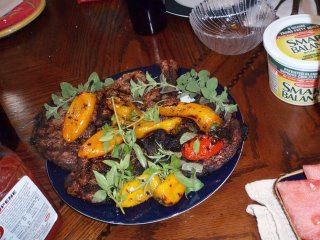 Okay, so I haven't been here for a while. Here's some steaks I grilled for little E's birthday in July, with roasted peppers (not from garden) and herbs (from garden). Tomato pics forthcoming...

So, it's not like I've just been sitting around totally avoiding the internet. On the contrary. I kind of fell into organizing a 3-day cabin camp for story-games roleplayers. So, 20 people, 2 cabins, 3 days of trying new story games these people wrote, and I get to transport the food. It's going to be a blast, if it doesn't kill me.