The fox-emblem has been photographed, and the meaning found.
Posted by Dave Y at 7:12 PM 2 comments: Links to this post

So, if you're already watching NBC's "Chuck", you've already noticed Yvonne Strahovski, who plays Sarah Walker, a CIA agent sent to make sure Chuck stays out of trouble. But she's new in the US, and doesn't (or didn't) seem to have any fansites devoted to her yet. So when lykaon and the technonaut saw the need, a plot was hatched and www.strahotski.com was born.

We here at "As if you care" wish Strahotski.com all the best. May it soon become the premiere site for Yvonne Strahovski fans.

And I didn't say "Mouthbreather Constituency" even once!
Posted by Dave Y at 8:38 PM No comments: Links to this post I was a Templar fan from the first time I read Foucault's Pendulum 13 years ago and my mom recommended Holy Blood, Holy Grail. Which is why I never saw or read The Da Vinci Code - I've always snobbishly looked down my nose at the 'new Templar fans' who only learned about this stuff from a book I haven't read but have prejudged. And I will continue to do so, stubbornly; snobbishly. But I do hope the new manuscripts have some juicy new info in them for us all, old fans and new, to check out.
Posted by Dave Y at 9:43 PM 1 comment: Links to this post

The Shadow of Yesterday

My friend Clinton R. Nixon, who has written several RPGs, has put together a comprehensive wiki version of The Shadow of Yesterday. It's a great game, and he's released it all with the Creative Commons license, so people are pretty free to do what they want with it. I've seen adaptations of it to play Aztec-themed games, Civil War superheroes, even Watership Down. But there's a lot of great ideas in the 'canonical' setting, too. So if you're a gamer, or just need something interesting to keep you occupied, go poke around.
Posted by Dave Y at 3:36 PM 1 comment: Links to this post

I love wikipedia: Hoist by his own Petard edition

I love wikipedia, for so many reasons. I have, in my Firefox browser, a direct Wikipedia search box, which sees frequent use. Such was the case when hemisphire recently accused me of being "Hoist by my own Petard." Not only had I never heard the phrase (except in passing in Hamlet, apparently), but I had no idea what was being talked about. Awesome. Never will I watch The Two Towers again without thinking about petards during the orc torchrunner part at Helm's Deep.

I didn't experience the full-on xkcd-wikipedia effect, but I did end up on the Fougasse page, where I learned there was a British Petroleum Warfare Department in WWII, and read an interesting account of early anti-personnel fougasse usage in the Crimean war.
Posted by Dave Y at 4:04 PM 5 comments: Links to this post

Another What if: Education

Today at lunch, Lykaon was saying he wished he could go back and get another degree in Psychology to help understand people, their motivations, and their relationships.

This has spurred quite a lively conversation, so here's my challenge to you:
From the degree programs, certificates, and other academic accreditations available at whatever college you spent the most time at, which one (besides the one you ended up with, if you did) would you find most interesting to pursue? For the sake of the hypothetical, we'll just assume you have time for the coursework, satisfy the prerequisites, and that paying for it isn't an issue. I also want to know, out of the same list of programs, which you would like _least_ to work towards -either because you feel it is useless, or too hard, or whatever.

Perusing GMU's list, I can say right off that the LEAST interesting to me is Jazz Studies - I think that's ridiculous, but the reasons will have to wait for another day. Most interesting would be either the minor in Folklore, the Master of Science in Information Security and Assurance, or a BA in History.

Labels: education, what if 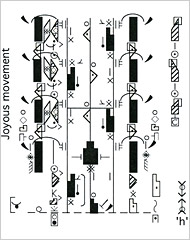 I recently came across a story about the Dance Notation Bureau that talked about the near-death and resurgence of "Labanotation", a written system for annotating dance allegedly accurate down to the eyeball-blink.

Then, the other day, Davey, in one of his various efforts to make sure I go insane or at least don't get as much work done as I might otherwise, sent a link along about the Voynich Manuscript which has yet to be translated, if in fact any translation exists.

It has me thinking about all the different ways we humans use writing, and all of its various forms. How very many of them that were once used are now exceedingly rare or entirely forgotten. On the one hand, it seems a great pity to have lost so much knowledge that was part of humanity's development; on the other, as languages die and are folded into each other, more people are able to communicate, and that can't be all bad. Taken to its natural extreme, we would expect that, given enough time and globalization, everyone will speak the same tongue.

Then there is the idea that all of language springs from some (lost) original, single language, termed Adamic[link] by some, Enochian[link]
by others, and probably known by myriad other names. Those of you who have read Genesis will remember the story of the Tower of Babel, and of the confounding of tongues [link] as punishment for attempting to reach heaven by mere architecture. It's not the only account of a perfect, original language being lost. Some time ago now, I started but never finished The Search for the Perfect Language, by Umberto Eco (Amazon is kind enough to tell me I bought it in May, 2004). From the back copy: "The idea that there once existed a language which perfectly and unambiguously expressed the essence of all possible things and concepts has occupied the minds of philosophers, theologians, mystics, and others for at least two millennia. This is an investigation into the history of that idea and of its profound influence on European thought, culture, and history." I wish I'd read it all, but (and I say this as a fan) Eco's not all that easy to read. Maybe I'll put it back in the queue.

But, for now, we're losing languages and methods of notation. And, reason would argue, it's bound to happen. That linguistics and systems of writing or notation should follow 'the survival of the fittest' comes as no surprise. Probably we would be correct if we said that any such system or language passed out of use because it was no longer needed by those who knew it, or because they themselves failed to pass it on.

Still, part of me pines to know all such things. I doubt I could even come to know the full list of disappeared or little-used systems of writing, much less actually learn any of them.

Here are a few, in broad strokes: And so forth. Totally useless to my modern life - all of them. And yet... I mean, if I could mark my street with hobo signs saying this wasn't a good place to stop, that'd keep the hobos away, right? Or, if I could read alchemical symbols, I could, uh, make something? If I spoke Navajo, I could be a WWII Codetalker? See, there's no reason to want to know any of it. But that doesn't stop me.

So here's a point to ponder: let's say you woke up tomorrow as a perfect example of Xenoglossia; you can now speak or read/write (but not both speak and write) any language or notational system, living or dead, that is currently known by no more than 100,000 people. Which do you choose, and why?
Posted by Dave Y at 5:14 AM 7 comments: Links to this post