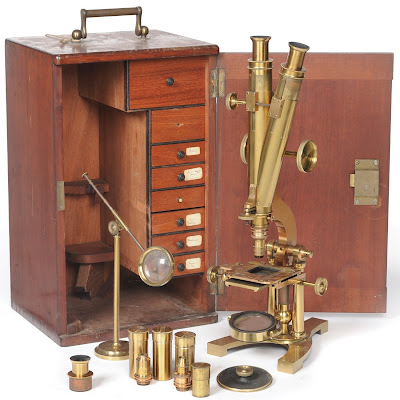 If I had a big load of money and needed to spend it all this weekend and had a huge laboratory (pronounced 'lab-OR-a-tree') to fill up or a steampunk movie I had to buy props for, I would fill up a truck at the
Tennants Auctioneers: Scientific and Musical Instruments sale this weekend. It's only about 35 miles away.
Posted by Dave Y at 10:09 PM 4 comments:

A British American in America, part 1

I was rather dismayed when my recent poll indicated that I ought to write more about what's actually going on in my life; that's the sort of thing that is a real chore for me. So much so that there have been times when I wished I never even mentioned it as an option in that poll. My reticence notwithstanding, its clear that some of you have not taken the spirit of this blog's title into account, and actually DO care. Generally speaking, that is enough to make me rather uncomfortable, but individually I also care about most of your lives in one way or another, and that the feeling might be mutual is both obvious and understandable.

I consider myself a pretty good reader (though I read less often than I feel I should), and not altogether a bad speaker, but the effort of writing takes considerable focus and effort for me. I shamelessly envy friends like Jeff who are able to compose long, interesting blog entries with little apparent effort. No doubt that is the fruit of years of practice and applied willpower, while I've been busy doing whatever it is I do instead of learning to write easily.

But once in a great while, I have something I want to articulate, and this is the forum I've established for it. You may find this to be more of a philosophical meandering than a personal update, but I hope you can see how the two are bound together.

After living here in the UK for more than a year now, I recently had the opportunity to visit America again, for the third time since moving to England. It was clear to me on numerous occasions during this visit just how very much England has started to change me. Of course, stuck inside my own frame, it is to my benefit to see these changes as positive; your perspective may vary considerably. Here are a few of the musings I remember along this vein of thought.

* I remember being entirely shocked my first day back at just how FAST fast food really is. This was at a Wendys in Maryland near the West VA border with my parents and daughter. I ordered, paid, and by the time I got my change my tray was halfway full of the items I'd requested. OK, so being used to slow service is not really a beneficial change. I sort of leaned over the counter to see the employees, and there were maybe 4 or 5 of them, methodically fulfilling orders as fast as they came in. Here in Harrogate at least, even at fast food places like the Subway we occasionally visit, there is usually only one or two employees, and they are not in any particular hurry. At my favorite sandwich shop in town, if I order a panini, I know it will be perhaps 10 minutes before it comes to me, even if there are three people working. But nobody seems to mind much. As is their way, the English customers calmly form a queue and wait patiently, knowing they will be served when their time comes. Which brings me to...

* Queues, or "lines" if you must. I remember reading about their importance in Watching the English before we came and being comically amused by just how true it all was when we arrived. They really will form orderly queues without verbal communication in almost any situation, and will glare or even actually speak out (which is a BIG deal) when queue protocol is broken. I don't have any issue with that, and have grown a bit British in that I have come to expect that behavior. So when, for example, H and I arrived in the US (in Detroit of all places) and had to pass through customs, I was a little taken aback when we had to sort of join a mob of people that slowly filtered into the line dividers. After the physical markers were in place, people had no trouble keeping in line, but outside those sentinels of order, chaos reigned.

There are a few more, but let's not get carried away for now. More later.
Posted by Dave Y at 1:32 AM 3 comments:

Which is pretty amazingly awesome by itself, but it takes on a whole new dimension when you see it shot-for-shot with the original Magnum credits:

I had a fabulous time at Nerdly this year - many thanks to M for letting me leave her alone with a kiddo and another one on the way while I went and played games.

See what you missed, including the part where I ambush Eppy.

Tomorrow I leave my parents house around 10AM and begin a grueling homeward journey that will hopefully result in me getting to my own home around 10AM the following morning. I can only hope H is as much of a trooper as she was on the flights out here.
Posted by Dave Y at 3:38 AM 2 comments: