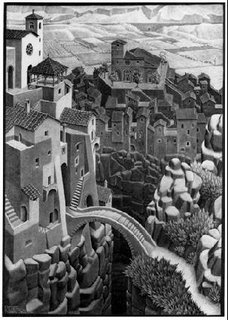 I had quite the vivid Dreaming this morning.

My life being what it is, I didn't have time to record it when I was awakened - children to attend to and all that. I've been meaning to write it down all day, but its long and, as with all of my dreams, rambling and nonsensical. Here's how it all went down:

Scene One: In which an Affordable Apartment is Discovered.

So often in my dreams the city is alive, bizarre, and sort of 'Amalfi Coast'-like. I blame this on Neil Gaiman, Italo Calvino, and M.C. Escher circa 1930, respectively. So it was last night, and the first thing I remember is being in a car, ascending a steep hilly road encompassed about on both sides with buildings on top of buildings, and headed towards an overpass near the top of the hill which is itself more buildings. Instead of finishing my ascent, I pull off to a shoulder and park the car on the hill. There are stairs there, which I ascend. Everything is made of stone, or maybe well-disguised cement. No, it's my dream-city, and I decide it must all be stone. My friend Jeff is there, and he wants to show me this new apartment he's just rented. It's all one big room right now, but he has plans to subdivide it with cubicle dividers and make different spaces out of it. From where we go in the front door, it's maybe 30 feet on the side we're on, we're halfway up its 30 feet in height (small stairs lead down to the ground level, and it extends perhaps 60 feet back to the other wall. At the moment, it is entirely bare, and painted sky blue from floor to ceiling. Jeff (who is not Italian, but who went to Italy last year and so passes for an authority on these types of things in dreams) informs me that he's only paying for it what the average Italian worker makes in a day - $1.75 or some nonsense. I consider getting such an apartment too at such a price, but I can't be bothered too just now - there's other places to go in this dream.

We pass through columned hallways on the overpass and over to the other side of the street, where there is a Game Store. I'm alone for the moment (but for the other customers). I poke through the shelves, but there's nothing I want - it's all the same old schlocky game supplements for games I don't play, or for older editions of things I do. I note that people have been careless in reshelving; some of the books are crammed down inbetween bookshelves or otherwise uncared for. I am a little sad there's nothing here I want, for I love it when there's new goodies to be had at my FLGS (that's Friendly Local Game Store, see?).

I am hungry, and I wanted to try out the Greek place next door to the game store, but as I'm going over there, they're closing up for the night - it's 7PM and that's when they close (bad business sense, I know). So I'm out of luck. I decide to ask one of the other customers from the game store where the best places are around to eat. She points out a seafood place and another place whose name I can't recall. We decide against the seafood and sit down at the other place. She is thin, dark haired, and pretty - a little Eva Green-esque come to think of it, but it's all innocent and I notice in the dream that I'm wearing my wedding ring, so I know there'll be no shenanigans. The place has excellent food that I wish I could remember - suffice it to say that the chef, a portly lady, comes out to consult with us and make recommendations for dishes I've never heard of, each more delicious sounding than the last.

Did I say entirely innocent? Well the bad news is I wake up next to her the following morning. The good news is we're both clothed, and actually I'm not really me - this is all third-person perspective here and I'm actually Jeff. (Jeff - next time I'm on a date with Eva, don't you be stealing her away to your little italian-wage palace, eh?). They (or we) decide to see some places, a little outside the city. In particular, it's time to go see the haunts of the rich and famous. Still third person perspective as Jeff and the girl hike up seaside gravel road hairpin turns and look out at the bird-filled shore.

Now we enter the most vivid parts of the dream. There is a whole group of us now, and sometimes we're just wandering friends and sometimes we seem to be some sort of team with a goal I don't really know about. Anyway we're busy looking about on some rich dude's property, and it's gorgeous - like tall well spaced oak tree forest entirely carpeted in moss, or more tropical looking forest venues with enormous stone pillar ruins. The ground is enormous slabs of granite - its all perfectly designed. That's when we come to...

Or maybe it's just a large kinetic sculpture. Anyway there's this towerey sort of thing, with well-stained wood and cord and large wooden spheres of various colors, and it moves, and we wonder what its all about. I decide to go into the heart of the beast to try to figger it out. I make my way in and am just having a look around, and there's hustle and bustle out where the others are - I can't see them anymore - its all cords and spheres and whatnot. I make my way out and discover that a representative of the property owner has arrived and we're to leave. This was sort of expected eventually, so we're not surprised or angry, and neither is he. We go to the nearest building where this employee resides so we can make phone calls or something.

So we go to his little run-down house and he offers us cranberry juice in old coffee mugs, which I accept. Our little group now includes Clive Owen, who's somehow in charge, and he's trying to get people all organized and what not. But then the property owner shows up, and he wants me to come out of the house and talk to him. So I do.

The property owner only has one eye. The other one is a sealed socket, and over the course of our conversation it occurs to me that 1) I'm dreaming, 2) this is the 'Wise Old Man' scene, and therefore 3) the only Wise Old Man with one eye is Odin. So I'm talking to Odin and haven't let on that I know who he is yet. He wants to tell me about this other place within his domain (property is now a tenous term) that I didn't get to see. In fact, he's never seen it. It can't be gotten too - it's the wild heart of the place. Over that way, past all the columns and forests - he shows me on a map and it looks like maybe its an enormous crater or something. It is dark, and wild, and he wanted to make sure this place would be preserved. I make a comment (trust me, it wasn't gauche or anything) about whether he'd be willing to have ravens peck out the other eye, and he corrects me - the Ravens didn't peck it out and eat it: He was made to eat his eye with the help of the Ravens, and its clear that in doing so he actually created the place he's telling me about - the place that man cannot conquer, or something like that. Anyway, now he's told me about it, and its time for us to go.

We are evacuated by helicopter. The man hanging off the skids when it touches down is named Philip, and he has a swordbelt on. Don't ask how I know that. I don't ask any questions.

This part is just an image. No wait, first, the term Assassin's Butter is a made-up poison in one of my RPG books. Totally irrelevant to this scene, but that's how the term is in my subconscious. It's here in the dream because Jeff and I have a long-standing idea about something called the Punk Assassin which is an idea, a character, a fake tattoo, and nothing of note, all-at-once. Nevermind, that made no sense whatsoever. Anyway, the parting image of the dream is Jeff, again, opening the doors to his new restaurant, the name of which is The Assassin's Butter. The doors are large, wooden, and gilt with spiraling designs. Jeff is now sporting a large pointy mustache and tiny goatee, musketeer-style. It's never said, but I somehow understand that my encounter with the wealthy former-Norse-God has somehow led to the financing of this operation, and I'm proud. The food here's going to be even better than that other place.

All you crackpot amateur dream interpreters are welcome to post your various interpretations, provided of course that none of them make me out to be any crazier than I happen to know that I already am.
Posted by Dave Y at 4:50 AM 5 comments:

From one Nerdly to another

So one of the few things I have blogged about here is Camp Nerdly - now we're doing another, bigger one in May. I'm helping out, but someone else is taking the lead on the finances and everything (Thanks, Jason!). This time, I think we're doing a lot more things right the first time. Not that anything went particularly Wrong last time or anything, but I have a good feeling about this.

For one, lots of people are helping organize it, and it has a wiki to help facilitate that (I'm all about the wikis, seriously).

Speaking of the wiki, today drove not quite an hour down to the park to take some pictures of the site. It's closed for the winter, but one of the rangers went around with me unlocking doors so I could take pics. At the bottom of the page, you'll see a series of my very happy son going down the slide. What you won't see is how very angry he was at me when I picked him up and told him we were all done with the slide a little while later.

For the first one, it was like 35 degrees at night in October. Now, in January, it was maybe 65 degrees today. I'm just hoping by the time May 4-6 rolls around it won't be 40 degrees and pouring rain.
Posted by Dave Y at 4:56 AM No comments: