Word of the Day: Chiminage

I saw this used in a forum thread and had to look it up. It's totally getting added to 'words to look for reasons to use'. 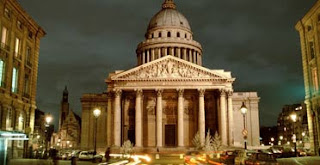 An underground cell of secret restorationists has struck in Paris:

For a year from September 2005, under the nose of the Panthéon's unsuspecting security officials, a group of intrepid "illegal restorers" set up a secret workshop and lounge in a cavity under the building's famous dome. Under the supervision of group member Jean-Baptiste Viot, a professional clockmaker, they pieced apart and repaired the antique clock that had been left to rust in the building since the 1960s. Only when their clandestine revamp of the elaborate timepiece had been completed did they reveal themselves.

I had an excellent Thanksgiving. Other than sick kiddos, everything about this trip was just as I would have liked it - I got to spend a whole week someplace instead of just a few days, had good food and lots of great family around, got to go to Jiffycon and play some games and meet new people, and generally have an excellent time.

While I was on vacation, I decided to actually start on an idea I've had for a long time. I make lots of random generators, for gaming and just because I like to see how little bits of creativity each contributed atomically can add up to interesting and unexpected results. The idea I'd been nurturing but not starting on was to make a random generator that could come up with new cultural rituals. Societies are filled with ritual, and imagining interesting fictional societies means imagining the rituals that might fill their lives. So I started listing all the occasions on which rituals, ceremonies, or rites are performed in one column, and the substance of the rite in another column. I enlisted the help of one of my sisters and a couple of my nephews, and we ended up with quite a list.

Then last night, I made it: Rituals Generator

warning: not all of the rituals it will generate are 'child-safe'. As with real rituals, sex is sometimes involved.
Posted by Dave Y at 4:24 PM No comments:

The Secret Language of Motorcyclists

d-pulse, knowing of my interest in all things of hidden meaning, sent along a link to this guide to motorcycle waves.

He also mentioned he's doing a post on this for some "other blog" he works on; link will be posted here or in the comments when there's more.
Posted by Dave Y at 4:14 PM 2 comments:

Daring Dean and the Devious Devilfish!

Having lots of fun making a random generator for Pulp Novel Titles. Making it sometimes-alliterative is good fun.
Posted by Dave Y at 9:48 PM No comments:

Dogs in the Vineyard 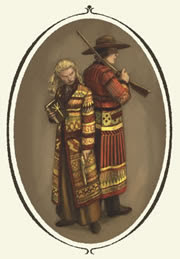 Tonight some friends and I (hi Davey!) are going to play Dogs in the Vineyard, a roleplaying game where the players are supernatural gunfighter/priests in an old-west religious utopia. That idea, by itself, is lots of fun. But there's more to why we're playing this particular game tonight. Dogs is a different kind of roleplaying game.

I grew up playing D&D (still do, actually), which is the granddaddy of RPGs. The basic idea behind D&D is that you're some kind of fantasy hero (a warrior, priest, thief, wizard, etc) and you fight monsters, kill them, and take their stuff. Which can be amazing fun. When you want to do something, say, climb up a cliff to get at the goblin who's trying to stick arrows in you, you (a player) tell your Game Master (the guy who controls everyone but the heroes) "Hey, I want to climb up that cliff and fight that goblin!". So, you roll a polyhedral die to see if you make it up the cliff, another when you want to see whether you or the goblin gets to hit first, another when you want to see if you actually hit, and another to see how damaging your blow was to the goblin archer. If you didn't kill him, you'll do most of that again on your turn after the goblin fights back. I don't mean to make it sound tedious (though at times it can be) but there's a lot of dice-rolling, and your hero is defined by a whole lot of different stats and skill levels, usually written down on a piece of paper so you can track it all.

Davey & Mark are from the 'World of Darkness' school of roleplaying, which is responsible for Anne Rice-like vampire games and werewolf games and so forth. I've had only passing contact with that rules set, so hopefully I won't misrepresent it too terribly. It's more or less like D&D - every task you have in mind, you roll some dice and determine your degree of success. The way Davey and Mark usually use the system, there's lots of intrigue and the players are usually trying to uncover the twisted plot of the GM. Since Mark and Davey are quite cunning, they usually make devious plots that would require especially shrewd players to uncover them. Trust me, you don't want Mark and Davey planning your possible demise.

So anyway, recently, Davey was talking (well, blogging) about starting a new game and the conundrum of whether to dig deep and make a setting where his players will never do more than scratch the surface, or whether to simplify things and risk them guessing all his evil plans and frustrating them. Then he and Mark came over and we got to talking about different styles of roleplaying, and that I come from a school where it isn't strictly "GM's creativity vs. Player's ingenuity". But it's hard to explain just how a different system works; better to play it.

Dogs in the Vineyard works like this: the players' job is to go to a town in trouble, and figure out how to fix it. They are God's Watchdogs (thus: Dogs) in his Vineyard - the kingdom of God on earth - which looks a lot like Antebellum Utah. Their mandate is to judge what is & isn't sin, and put it right. The GM's job is to create a town where there's some problem somewhere along the pride-injustice-sin-corrupt worship-false priesthood-hatred scale. In fact, the process for creating the towns and their problems is straight out of Mormon theology: somebody has pride about something, it leads to them sinning, they justify the sin which leads to corrupt worship, and so on. What's different about a GM's role in DitV is that you're not supposed to have any particular solution in mind. Whereas, in D&D or World of Darkness, the GM might make an intricate plot and lead the players from scene to scene, culminating in a grand finale he's known about for months, instead my job as GM tonight is to make the situation which is pregnant with conflict, play the parts of the townsfolk who all want the Dogs to do different things, and then escalate the conflicts they find themselves in. It's entirely up to the players who is right and who is wrong; they're judges and that's their job.

Also, the way the game uses dice is really nifty. But it's best explained in play. So while my go-to game is still D&D, I'll run Dogs in the Vineyard for any of you, any time.
Posted by Dave Y at 1:53 PM 7 comments:

See what happens when you throw words like 'semantic' around?