Apparently I'd need a British explorer just to help me find such a thing...

I chickened out on the whole topsoil thing. It was pouring rain here this morning, so although I went to Home Depot, I did not feel like going out into the pouring rain with my daughter, loading wet (ergo heavier & slipprier) bags of topsoil into my orange cart, then loading them again into the car, then unloading them back at the house. Not in that rain. So, I'll either do it at the beginning of the week, or it won't happen, and that'll be fine too. I did, however, get some painting supplies and turf builder and japanese beetle killer and grass seed at the big HD. I looked at light fixtures since there are a couple I want to replace, but didn't buy any of those.
Then, since I was in an errand-running mood (which I rarely am - a fault I acknowledge), and since my daughter was having fun & totally behaving herself, we decided to go to a few more stores. I stopped by Mens Wearhouse, Old Navy, Banana Republic and Gap (all near eachother) to inquire about a linen suit (or at least a blazer) but no luck. I have a linen suit, which is awesome and I love being the only guy I know who actually has one, but its probably 10 years old now. I actually got it at Old Navy back in the day, and it has served me well, but it is time to replace it. So, a fruitless search on that front. Gap.com has one online only, but I'd rather try one on before buying, and I'd like pants that are precisely the same shade, which (stupidly) gap.com fails to offer.
Why a linen suit? I guess there's just something about the sort of Victorian era british explorer mythos that I really dig. (You should know, for purposes of this conversation, that I also own my own pith helmet.) Weird, yeah maybe. I also like morning coats and would be totally fine with it if they came back into men's fashion. More on that another time. My linen suit is what we're talking about here. Seriously, every time I wear it a different guy comes up to me and tells me he wishes he had a linen suit too. Its possible I suppose that some of these guys are mocking me to my face, but that's not the impression I get. But, it is surprisingly hard to get a linen suit, at least affordably. The guy in Men's Wearhouse was like "No, sorry, I don't have one, but I know Neiman Marcus and Saks both have them." uh, yeah, thanks but no thanks. Do I look like I want to spend $1000 on my linen suit? Furthermore, both of theirs are full-on white, and that's not what I'm going for. Natural linen. Is that so hard? A number of places (notably Banana Republic) have khaki-colored twill suits or blazers this year, and while that's probably just as functional (plus can be worn as a suit with any khakis I suppose) that just doesn't quite get there for me. Ah well. probably I'll just order the gap one and then look around independently for the matching pants. Then I'll be ready for my trip to find the headwaters of the Nile...
Posted by Dave Y at 5:30 AM 2 comments:

Burpee says they shipped today! Which means I need to put topsoil & organic fertilizer (read: manure) in the garden this weekend so it will be all ready for them come Tuesday.
Posted by Dave Y at 4:37 AM 1 comment: 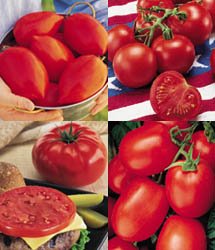 Last year, in my 3 foot by 16 foot garden plot, I grew 10 kinds of tomatoes (Big Boy, Big Mama, Fourth of July early hybrid, Brandy Boy, Burpee's Burger, Health Kick, Sweet Tangerine, Sweet Baby Girl, Sun gold, plus some Yellow Pear plants that came up volunteer from the year before), plus 6 pepper plants (hot lemon & poblano), basil, a single watermelon, arugula in the spring, and a failed attempt at beans. Apparently, 10 varieties of tomatoes is too much in such a small space. So, after much deliberation, a little hemming and hawing, and more than a few subtle suggestions from my wife, I have agreed to cut down on the number of tomatoes I try to fit into such a small space. This year there will be... only 5 types of tomatoes (but 7 plants!): the Burpee's Sampler (Big Mama, Fourth of July, Burpee's Burger, and Health Kick), plus 3 plants of the Burpee's Supersteak GIANT hybrid. Oh, and we'll probably have yellow pears again, but I'm debating whether to let them grow this year. So - maybe not quite the tomato overload, but still a lot of tomatoes. I can't help it - they send out the catalog in winter with pictures of scarlet tomatoey goodness on the cover. So that's the tomatoes.
Why so many different tomatoes, you may ask? Because I can. Because the tomato that's perfect for burgers is not at all the tomato you want to chop up for salsa, and neither of them is the tomato you want to put in your salad. And because I love the color of them on a bright green bush, and the smell of the tomato plants that gets on your hands, and being able to bring in basketfuls at a time that make it look like I just hit the jackpot at the farmer's market. 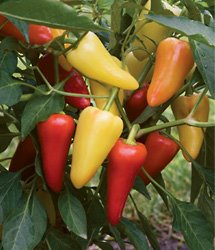 Then there's the whole pepper thing. Last year I did the hot lemons, which had a very clean hotness to them - I liked it a lot but they were hotter than I'd usually be able to eat without consequences, and there were way more of them than I could ever use. I ended up making hot pepper relish with all the leftover peppers (which filled the house with a spicy vinegary aroma that I loved and my wife did not). But then I never really used the pepper relish either. Hmf. So I needed something not quite as hot, that I could use in salsas and such without killing everybody. Jalapenos and Serranos are good, but I've done them both before, and I wanted something colorful and new. Thus: the Mariachi hybrid (3 plants). Plus, because I wanted some colorful sweet peppers too, I'm getting 3 plants of the Blushing Beauty. which, again, will probably be too many peppers, but at least I'll be making a milder (read: more usable) and extremely colorful batch of pepper relish to use them all up come September.
Plus, basil so good I can eat it straight, spicy arugula better than any lettuce in a salad, a new batch of herbs to cook with, hopefully newfound success in beans, and the return of the extremely productive zucchini. I can't wait for August, when this stuff'll be in full production mode. For that matter, I can't wait till I get my plants in a couple of weeks and dig them in.
Posted by Dave Y at 10:31 PM 2 comments:

Don't get your hopes up

Seriously. I fully expect this space will be neglected, filled with the virtual cobwebs left by passing spiders. Occasionally, very occasionally, there may be updates. Or rants. Or what-have-you.
Posted by Dave Y at 8:55 PM No comments: