As if You Care about ... Cocaine 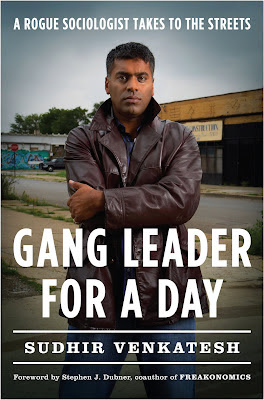 A few entries back, I mentioned a series of guest posts on the Freakonomics blog about how real life thugs view "The Wire", and I said I'd probably read Sudhir Venkatesh's book. Well, I did. It is probably the first book I've read in less than a week in a very long time - usually I'm splitting reading time between a lot of books, or not really reading at all for a few months at a time. This account held me captivated - it deals not only with the conditions of a poor black housing project, but with the economics of running a crack cocaine gang, and the other sub-rosa economics of car repair, prostitution, stealing cable, bribing housing officials, clergy, police, and everyone else. Also, I was sick a bit this week, and had more time to read than usual.

It took something I knew a little tiny bit about, and gave me a lot of fascinating details I would never have thought of. It focuses not just on how the gangs work in and of themselves, but also how they essentially function as a partial government in a place where there is none, along with empowered old ladies who control the buildings themselves and make sure when a woman is beaten that the culprit is rounded up and likewise beaten, or who take a cut of all the hairdressers' and candy-sellers' incomes as a sort of tax, the same way the gangs tax male hustlers in the buildings.

Now, that doesn't change the fact that there's a negative side to all of this: we're still talking about people in the most abject poverty, many of whom are selling drugs that destroy other people's lives. It's not exactly uplifting stuff. Recommended for those of you who are entreprenurial in nature, with the hope that you direct your energies into another field.

Then, today, I read about a town in Nicaragua where almost nobody works, but where bales of cocaine discarded by smugglers fleeing interdiction wash up on the shore. It makes for a fascinating story, and it's here. So its been kind of a theme this week.
Posted by Dave Y at 3:19 AM 6 comments: